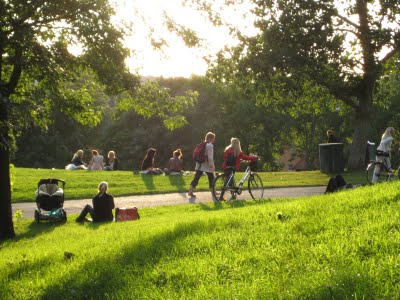 Sometimes when I’m in Stockholm, I happen to glance at something and think to myself, “Wow, that really looks like Sweden.” Of course, it is Sweden. In fact, Sweden is all around me, as far as I can walk, but I suppose I’m thinking more that it looks staged or like a stock photo someone would use in a text book or travel brochure.

Those moments are convenient because I can get so much of Sweden in just one photograph. In this one, so many typically Swedish elements are represented: picnics, nature, bicycles, baby carriages, vivid colors, general relaxing, healthy people, many with blonde hair and wearing black clothes.

Upon later investigation of the photo, I realized that of the eleven people in the picture, only one of them is a man. Maybe that’s part of why it looks so nice. And that one man is partially obscured behind a garbage can. Go on, git! You’re mussin’ up my pitcher!