Language, temperature, currency, distances, weight, geography. I thought my list of things I have to re-learn was complete. Then it came time to do the laundry. This control panel greeted me: 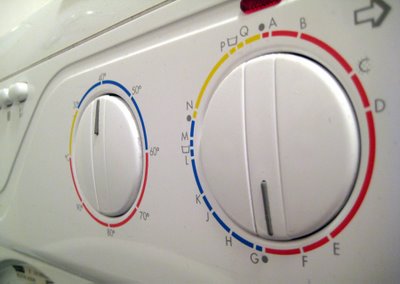 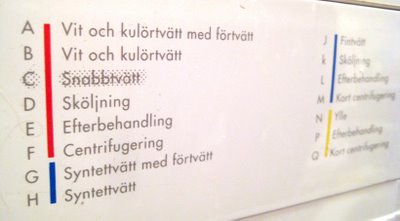 Needless to say, I had to look up some words, Google some symbols, and convert some temperatures. I had a pretty good idea of what was going on based on the symbols and colors, but you can never be too safe when it comes to laundry. After all, clothes are the bulk of all my worldly possessions at the moment. I wouldn’t want to end up with an entire load of pink clothes, like I did in Germany once upon a time.

While I was looking up that stuff, out of curiosity, I did an image search to find a photo of the controls on the washing machine I was accustomed to using in Louisville. Here it is below: two knobs! 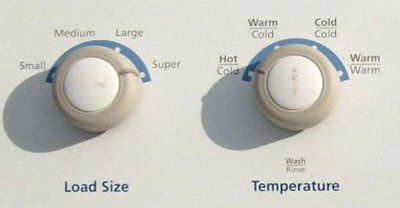 Some things are so American that I think they are comical and endearing at the same time. This control panel is certainly one of those things. When I saw it again, I laughed heartily, but I also had a warm feeling similar to when you see a little kid with chocolate all over their face. Awww, there, there, little buddy…

I especially love that one of the load sizes is “Super!” …and whoever took this picture had the knob in that position. Yes, in America you can even super-size your housework. Laundry sucks. Put that fucker on Super. I’m washin’ everything at once! 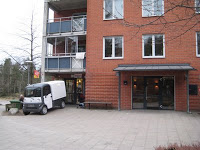 It’s true, though, American appliances are monsters in comparison. Monstrous perhaps even compared to some of the cars here. For example, this tiny delivery truck I saw today.

On the topic of knobs, controls, appliances, and consumer products, there is a new documentary about industrial design out now in America called Objectified. It is directed by Gary Hustwit who made one of my favorite movies, Helvetica, a documentary about the typeface of the same name.

Based on the trailer, I expect Objectified to go into some psychological detail about our reactions to devices and products. Though it will probably be a long while until I can see it, I can’t wait. I’m looking forward to hearing the ideas the designers and experts interviewed in the film have on human emotional responses to everyday products. My friend John recenty sent me a link to this gigantic page of cassette tapes. It brought back so many memories, I couldn’t finish looking at it.

Helvetica is now on DVD. Nothing short of fascinating. Below is Helvetica itself in use at Älvsjö, one of Stockholm’s Pendeltåg stations. Älvsjö was formerly the word I was having the most trouble pronouncing. I wouldn’t have a clue as to how to type it out phonetically. Maybe “el-fuh-whehh” is my best shot at that. Swedish is almost as much about inflection as pronunciation. The entire language is like a song. I think I’ve got this one word down. Now I’m stuck on dygn. 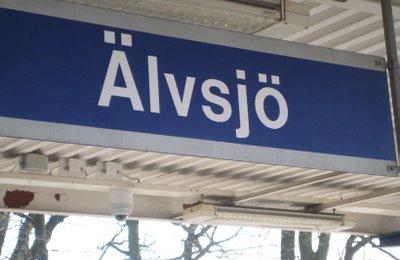 Billy Mitchell is a winner

Excuse me, do you speak American?